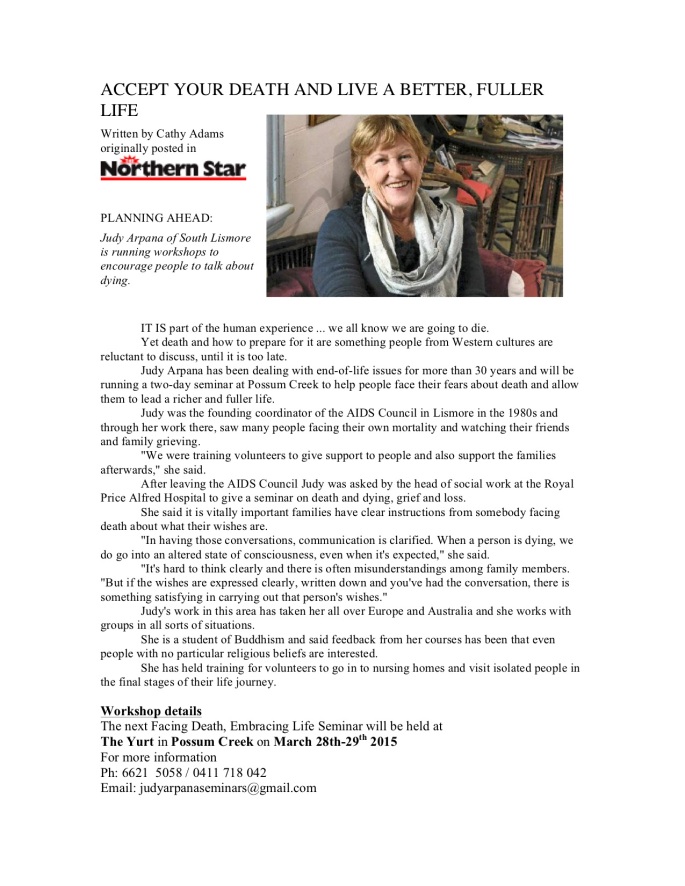 This was a two day seminar, led by Judy Arpana, held in Sydney back in October 2006.

Jess asked me to go on a two day course with her, “about dying”. I agreed, booked, and then tried not to think about it too much. Until suddenly I was there. Feeling a bit confronted and scared.

I want to preface this review by saying that I wanted to write a journal entry about the course shortly after I attended, but could never overcome the feeling that words were going to be inadequate for so many of the things I’d come to understand. It almost feels like I absorbed knowledge during the course rather than learned things – which means that I think it’s going to translate poorly to the written word, despite my best efforts.

The course was held in a quiet, leafy environment in the grounds of a private school. Judy spent a lot of time and effort to make us each feel comfortable. There were about 10 or 12 participants, I think, and it quickly became clear that these were sympathetic, genuine people.

It also became clear that the course was grounded mostly in Buddhist philosophy. This wasn’t pushed in any way, though, and the course was conducted in such a way that it didn’t preclude any other religious beliefs. For example, Jess as a committed Christian seemed very comfortable with everything that was said.

I got off to a great start by crying almost as soon as I first spoke, partly because of a strong sense of vulnerability, but mostly because the realisation struck me fully that I was attending this course because my friend was dying and I was really scared about that – both for her and for myself. Fortunately, the atmosphere that Judy had created meant that I didn’t have to feel embarrassed about crying, and soon enough I was so interested in what we were talking about and doing that I forgot to be so upset.

These are some of the things we covered in the course:

I felt quite fragile at the end of the course, but very different from how I felt at the start. Where at the beginning I had felt confronted and vulnerable, I now felt exposed, but peaceful, serene, and strong somehow.

I came away from the course thinking that everyone should do a course like it, not just people who are confronted with the likelihood of a death in the near term.

And now that Jess is gone, and I’m slowly getting used to that idea, I’ve been able to reflect on how much this course has helped me.

“I really enjoyed Judy’s down to earth approach, her manner and time she takes to explain is something unique: a special gift”

“The material was presented in a non-religious manner which blends with my life experience.”

“As a chaplain working with the dying all the material presented gave me added insight.”

“Thank you for a beautiful experience of peacefulness and mindfulness.”

“It has deepened my understanding of the dying process and affirmed much of my thinking.”

“The meditations were beneficial and inspire continued practice.”

“Judy had a wonderful sense of humour, an ability to laugh at herself, a huge wisdom and care that come through her words.”

“The material presented on the gift of presence was useful.  As a counsellor, sometimes I feel I should not know what will be ‘worked on’ in a session, although at the heart I know that being with the client fully is beneficial in and of itself.”

“The learning around ‘what is service’ and that it is not helping and fixing someone who is broken was most important.”

“The material presented appropriate, day-to-day practice in skills to care for the dying and of self-care.”

“The dying meditation was the most beneficial session, however, the way the sessions were linked helped make sense of each other.”

“The material presented gave me courage to be ‘present’ in a system that doesn’t do that.”

“These sessions have opened a few doors for me and I will be pleased to see how they work out in my life and practice.”

“While I gained something valuable from every presentation and everyone’s contribution, I couldn’t get enough of Judy and found I hung on her every word.”

“It has given me ways to work with myself and also more clues to be with the other.”

“The most important thing I learnt was about my motivation and what constitutes authentic presence.”

“I valued the exceptional style of presentation where we all learn from each other.”

“The presentations were participative and inclusive of everyone’s contributions, understandable to non-Buddhists.”

“Last year I faced death.  Friends and relatives die or are near death.  The material presented reminds me of what really matters in this life.”